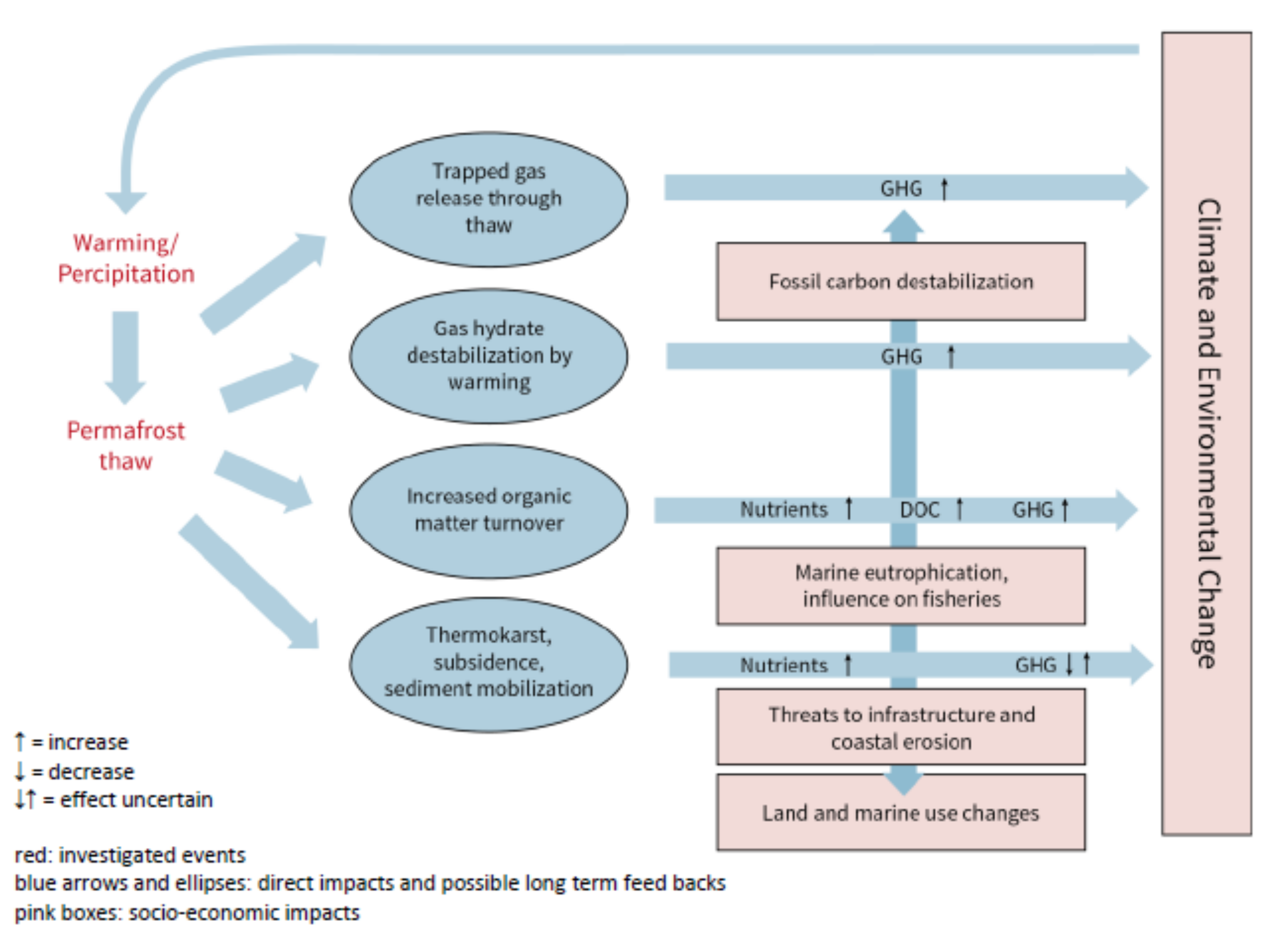 Humanity is faced with the consequences of a warming planet, with landscape changes affecting the exchange of energy and mass between land, ocean and atmosphere. One of the most sensitive components irreversibly affected by global climate change is permafrost, which underlies a quarter of the Northern Hemisphere’s land mass and a large portion of the Siberian and North American shelves. Changing climate is warming permafrost, warming permafrost thaws and degrades, and greenhouse gases (GHG) trapped within or beneath may be released.

Although permafrost dynamics are intensifying, there is still a great lack of data related to thaw subsidence, sub-aquatic permafrost occurrence, GHG release and land surface changes. Due to the complexity of processes and feedbacks involved, it is still not fully understood which regions are most vulnerable to thaw, how fast thaw may happen and how this will affect GHG fluxes. Key factors of Arctic ecosystems such as topography, land cover, size and availability of the terrestrial and marine carbon pool, influences of wind on gas exchange and other factors are poorly understood, thus widely disregarded in modeling climate dynamics and also poorly represented in atmospheric dynamics of global methane budget estimates. The IPCC (IPCC 2013) considers feedbacks due to permafrost thaw to be among the least constrained feedbacks to climate.

Research gaps (see Figure) include the impact of climate warming on the timing and distribution of rapid permafrost thaw and erosional processes in terrestrial and coastal areas as well as slower permafrost degradation further offshore. Permafrost thaw events can be driven by energy input through heat spells or intense precipitation, resulting in thermos-karst, subsidence, flooding, thaw slumps, submarine slope failure, rapid lake drainage, lagoon formation, or thermo-erosion. Thaw also results in changing organic matter turnover in terrestrial and aquatic environments, making wetlands, lakes and other cryoturbated areas hot spots of GHG emissions (CH4, CO2, and N2O) with varying intensity during different seasons. Offshore, permafrost is thawing both downward and upward due to warming ocean water and geothermal energy. Melting ground ice creates pathways through which gas from below and within the permafrost can migrate to the sediment surface and into the water column as free gas (ebullition) or dissolved gas and further into the atmosphere. The potential release of GHG due to water-body-mediated warming is undisputed but local, and even more global-scale flux estimates are highly uncertain.

Understanding and quantifying the contribution of thaw events to permafrost-related GHG emissions and to long-term trends in the Arctic requires an integrated observation system with mobile and modular infrastructure linking land, lake, coastal and offshore permafrost observations of thaw events, trends and related GHG release.

The proposed infrastructure will contribute to the parameterization of permafrost degradation in Earth system models and help to address the following hypotheses that will be studied by following the outlined event chains:

(3) Mapping and monitoring temporal variability of GHG fluxes at local to regional scales and over short to medium time scales (minutes to seasons) will demonstrate that changing pathways for gas migration determine the GHG contribution of Arctic permafrost to the atmosphere.

The MOSES infrastructure focuses on the impact of permafrost thaw events on GHG fluxes from terrestrial and aquatic systems occurring on local and regional scales. This will be achieved by utilizing observation systems from five MOSES modules, with the GEOMAR involvement mainly focussing on the offshore marine areas. On land and in the atmosphere, these will be components that form the land-atmosphere flux (GEOMAR) and flow and sediment dynamics modules. Terrestrial and coastal systems from the permafrost thaw and subsidence module will be used and linked to fixed point observatories (GEOMAR) and autonomous vehicles (GEOMAR) further offshore. As part of these modules, various sensor packages for GHG flux measurements and optical remote sensing are installed on UAVs, in lacustrine and coastal systems, and on larger landers supported by moorings, Wave Gliders and AUVs, for the arctic shelf environment. These observational systems will be able to:

• Measure physical boundary conditions for permafrost (energy fluxes) and their changes at land/water-atmosphere and lake/ocean floor-water column interfaces, and

• Quantify energy and GHG fluxes across these interfaces and identify the sources using isotopes.